It’s been a lazy, kind of busy holiday… But I’m back and better than ever.  Fired up to finally pop out this thesis and the accompanying arts.  An update on that another time.  Today I just quickly want to share with you all the press release for the Live Amateurs exhibition I’m participating in, which opens this Saturday!  Feel free to share it around.  🙂  See ya kids soon. 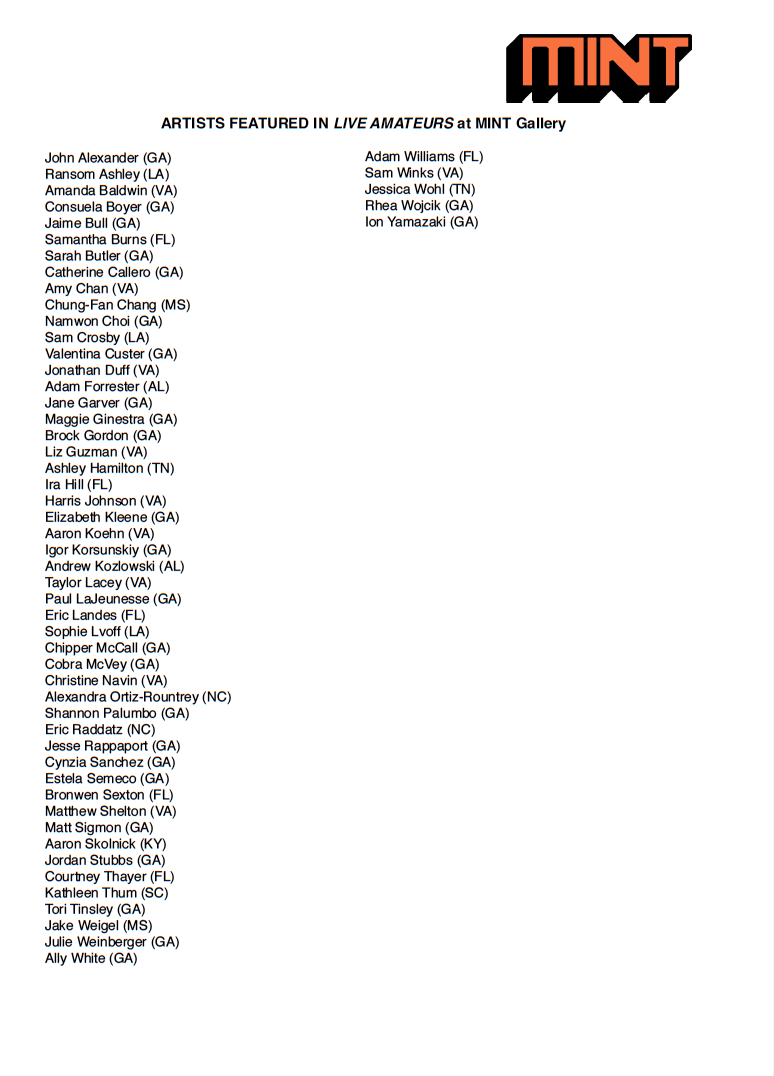 Been sitting on this for a bit, buuuuuuut:

The show opens in January!

Another thing that has kept me from posting recently was a visiting artist event in which I was involved.  Although this one I didn’t know I was participating in until nearly the last minute…

FSU brought in Stuart Horodner as part of our visiting artist lecture series.  He’s the boss man in charge at Atlanta Contemporary Art Center, and just recently published The Art Life:  On Creativity and Career (Which was a really good book by the way), and one of the faculty arranged for public critiques to happen.  Four grads were selected to have their work reviewed by Stuart, but we didn’t get told about it until a week before it was supposed to happen…

As I’m sure you can imagine, that was a little stressful.  I was less worried about the actual critique then I was about figuring out how to install my work in the gallery.  It was chaos for a little while… I had to go buy TVs and export videos several times, battle difficult projectors, paint things, oh and I had to read the book…  But it turned out just peachy keen in the end.  I showed an updated version of my Bending the Break/Breaking to Bend video, with a new audio component, and Fairy Tale Logic.  Bending the Break/Breaking to Bend was pretty much installed as I had it installed at Working Method back in January, but I finally got to install Fairy Tale Logic the way I’ve always wanted to… On two monitors!

As a really awesome bonus, Craig Drennen, who is currently a studio artist at Atlanta Contemporary Art Center, an instructor at Georgia State, aaaaaand the dean at Skowhegan, came down with Stuart to participate in the critiques.  While my peers may or may not agree with me, I had a really great experience.  The main thing that I wanted to get out of the crit was that someone, outside the hermetically sealed environment I have here at school (yes, that may be a little bit of a dramatic way to describe it), related to or understood the things I was addressing in my work.  Between all the doubt and frustration I had been experiencing lately, this was really the best thing I could hope for.  And I feel like I got that, as well as just positive feed back in general.  For what ever reason, I found this process much less anxiety provoking than our usual reviews…  Which I told to my committee head.  The way that Stuart ran the reviews was critical, but constructively so.  I sometimes feel that our committee reviews are not so constructive…  But again, that’s my opinion.

For some more pics and info you should click HERE!

In any event, this was one of the best experiences I’ve had so far in grad school.  It came pretty close to the Guerra de la Paz collaboration last spring…but not quite as awesome!  Speaking of which, I’ve been meaning to show you how the battle scar I acquired during that installation looks now:

Why can’t grad school just be awesome experiences like these?!

On that note… Adios!

Words that I Write a Little Too Often…

The Chaos in My Head

The Many Haunting Issues of My Life

The Chaos Outside My Head

Thing I may have said or written in the past…

The Chaos Outside My Head

Simply Made Kitchen and Crafts

"eat food. not too much. mostly plants." --michael pollan

Tips for how to budget and live frugally

Education and inspiration for visual storytellers

Your One Stop Procrastination Shop

A maelstrom of life, art, and anxiety.

Analysis paralysis, grass is greener syndrome, longing for the road not traveled: How the success of the women’s movement has left us stumped in the face of limitless options -- and how to get over it.

a Polish kid and her family from Toledo